Jump to content
From OS-tans.moe Wiki
How to make your own Infobox

Winblows 98-tan, also known as Hacchapitalist "Bill Gates" Madobe, is a money-hungry sick freak. But aren't we all money-hungry sick freaks deep down inside? Maybe. But Hacchapitalist sucks. She leads the winbows family cause she paid for that privilege. She may or may not be the reincarnation of Bill Gates (even though he's not dead...yet.). She owns Microshaft Corporation and is the richest person in existence.

Winblows 98-tan (whom we'll call WB98-tan for simplicity) is possibly the greediest member of the winbows family, and claims to be the second coming of Bill Gates, whatever the hell that means. She started Microshaft Corporation after losing all her money to the macks tans and wanted to 1-up them - big mistake because you're freaking stupidest. She ended up making a lot of money and soon enough became the richest oh ess tan in existence, and then started gaining delusion about being Bill Gates (she arenst) and became mean :( buly :( WAAAAAAAAHHHHH.

GOOD LORD OK she has dark messy blue hair and green eyes but her pupils are money signs. She wears a long black coat with a sleeveless schoolgirl uniform underneath, a blue skirt, long grey gloves & knee-highs, a green '98' hairclip, and a necktie reminiscent of the Winblows 98 logo. She has a blue mech-box that she wears occasionally and enjoys pretending to be a robot. Everyone knows she's being a fool but Nanami Server 2069 thinks otherwise and believes she is a real robot, and to not ruin the magic everyone plays along with it. Sound familiar?

The got damn problem at Mi¢ro$haft

She is a lesbian and is dating her maid, Windows E-tan, but had an affair with Windows 9-tan due to how great she thought she was at making money for her. Then she rendered her absolutely useless, took her kitsune powers away, and made her go missing. You suck.

She praises Bill Gates like he's a damn god (god damn), and owns every piece of Bill Gates merch. Actual capitalist scum except Bill Gates is pretty cool and she isn't. 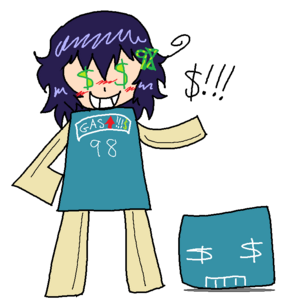 She's making the gas prices go up! Not even Bill Gates would do such a thing...

Isn't he just adorable? (answer: no)

To be honest, nobody really knows what the point of Microshaft Corporation is. She hired Microsoft Traffic Light-tan to only control the traffic across the street from her BIG CORPORATE BUILDING and solely her BIG CORPORATE BUILDING. But then she has a personal assassin, Windows XP Gangsta Edition-tan, to attempt assassinations toward richer people? AND she has a maid like mentioed before? It jut makes no sense.... Also why is Nanami Server here like seriously what the heck.

WB98-tan also wants Nanami Server 2069 to be gutted and fried to sell for big bucks despite Nanami Server's loyalty (especially toward her robot mech-box alter ego thing whatever) because she also hates Nanami server s selfishness. So rude wtf.

She often sells things from Billagotchis to entire pinball machines & board games themed around Bill Gates because Bill Gates is her lord and savior despite thinking she's Bill Gates idk its pretty convoluted........

She keeps her first ever dollar encased in glass and if anyone tries to steal it alarms go off and she sends off her assassin to deal with the thief....Talk about greedy.....

Despite Bill Gates' history of philanthropy, she doesn't want to give a penny to any of her employees or to charity. That's very ironic. WHy are you RICH.

Her obsession with Bill Gates has existed ever since she started Microshaft Corporation and made her first dollar, since then she has had a deep fascination with Bill Gates, calling him her #1 role model and even holding the belief of being his reincarnation, despite him not even being dead.

She actively sells merchandise and memorabilia of him for profit, but none of the profits go to charities or Bill himself (presumably due to her thinking she is him) despite Bill Gates' philanthropy. She's just greedy like that.

She uses internet explorer, despite how awful it is, because Awesome Microsoft Moments #20. She refuses to switch to something like Chrome or Firefox.

This is all ironic, because Bill Gates started working part-time at Microsoft in 2008 to work full-time on his charity[1], later stepping down as chairman of the board of Microsoft in 2014 to advise current Microsoft CEO Satya Nadella[2]. Then he just left his board positions all together xdxdxdxdxdxdxdxdxd[3]. He's not even the CEO anymore this is funny as h*ck. 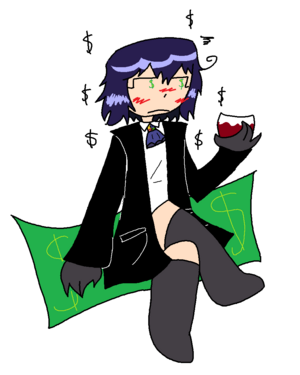 A terrible future lied for her...Don't do money, kids.

WB98-tan has a sister, who betrayed the winbows family to work for the macks to (successfully?) rip-off Microshaft, named Michealsoft Binbows-tan. Now they have a rivalry together, but previously they got along well and would build awesome computers together!!!!!!!!!!!!!! where did the years go, i wonder...

WB98-tan had a Bill Gates poster on her wall before working on Microshaft, foreshadowing what would come later. Absolutely horrifying. She also had a piggy bank with hundreds of dollars in it, including her first dollar that she later encased in glass, does that foreshadow anything? Maybe.

She would steal iPhones and destroy them for some reason cause

Did that foreshadow anything? Maybe.

So anyway, moral of the article: