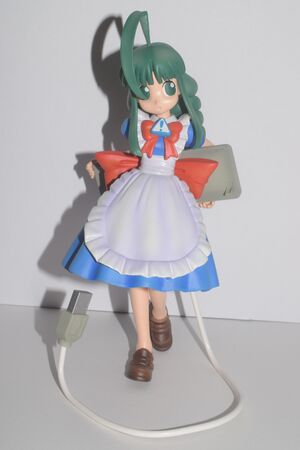 The Yūyu company produced a Me-tan Figure as one of their OS-tan merchandise. It is a 1/8 scale figure that was first released on February 20 2005 during the Winter Wonder Festival 2005 as a garage kit[1], and then as a prepainted PVC figure on May 2005 at the price of 4286 yens[2]. This page focuses on the latter and much more common version.

The keyboard can be separated and serves as a stand, though it is not very effective and still difficult to maintain the figure stood up, so another stand or object should be used to prevent it from falling.

The figure has an height of 18 cm (excluding the cowlick, which adds about 1.5 cm). The Me-tan part weights about 195 g while the keyboard weights about 20 g. The box with figure weights about 390 g.

These are indications written by collectors from the community to help to assess the rarity and value of such items. Learn more

It is a must have for many OS-tan collectors, so the demand for the figure is very high and can be noticed by reading the comments in the MyFigureCollection entry and noticing that it has the highest "Wished by" stat for all the OS-tan items on the site.

While not very common, it is fortunately not too rare and appears occasionally on Japanese markets, and even Ebay (though often at inflated prices like many similar items there). The exact number of figures produced is not known.

The Garage Kit version is much harder to find.

For the usual prepainted version,

Given the high demand, be prepared to pay more than $150 for the figure. A price up to $250 is still reasonable, however, since it is not too rare, you should not pay more for it and wait for another occasion if there is a sale asking such a high price.

The garage kit is extremely rare, but since people probably just want any of the variants or are not even aware of its existence, its value should not be much higher than the regular prepainted version.