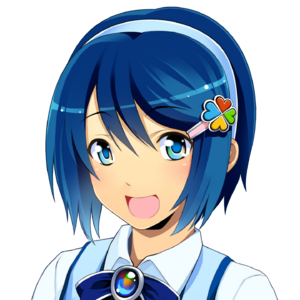 Her first formal mention was in an Akiba-PC article[1] from September 24 2009[2], announcing that a limited bundle, which includes a disc containing wallpapers and system sounds featuring her, came with 7,777 preordered copies of Windows 7 Ultimate. However, a Twitter account for her was already created on September 14 2009[3], tweeting news related to Windows 7[4].