Jump to content
From OS-tans.moe Wiki
How to make your own Infobox

In response to a post[1] by artist Danny Choo from March 6 2013 depicting personifications of Safari, Chrome and Firefox, the Collateral Damage Studios published two days later on their Facebook[2] and Tumblr[3] account a first work depicting Inori (presented as IE-tan version 1 in the Facebook post), drawn by artist WaHa, with the goal to get the Microsoft's attention.

The attempt was successful and soon after a representative from Microsoft Asia-Pacific approached the studio[4], and Inori became an official marketing material of the company. It is unclear when exactly she received the name of Inori Aizawa.

She was featured in a video created by Microsoft Singapore for the Anime Festival Asia 2013[5]. 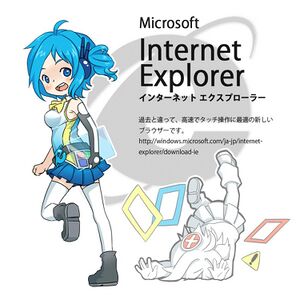